It has been the one rule that most Australian parents cling to in the confusing, fast-changing world of kids and media: no screens before age 2.

This week The American Academy of Pediatrics, which first issued that recommendation back in 1999, has extensively updated and revised its guidelines for children and adolescents to reflect new research and new habits.

The new guidelines, especially for very young children, shift the focus from WHAT is on the screen to WHO else is in the room. And in doing so, they raise some intriguing points about the future of learning from media.

In June this year University of Western Australia research co-author, professor Michael Rosenberg, already showed the APP guidelines were being routinely broken by Australian children, with 63 per cent exceeding the recommendations.

“Everyday I have mums ask me concerned about excessive screen time and the impact on their child’s health”.

For babies younger than 18 months, AAP still says no screens at all are the best idea — with one notable exception: live video chat.

Observational research shows that infants as young as 6 months are emotionally engaged during this time, but not to the extent obviously from live social interaction.

“Parents often ask me about the impact of their little ones using the popularity of Facetime or Skype”, states Ms Bude.

“It is great to know that virtual hug’s with grandma is ok”, she states.

For infants and toddlers, age 15 months to 2 years, there is limited evidence from a couple of very small studies that they can learn new words from educational media, if and only if parents are watching alongside them.

Parents are interactive, repeating what the video says and/or drawing attention to what is on the screen as they would when reading a picture book.

The second AAP guideline has changed from “avoid all screens under age 2” to “avoid solo media use in this age group.”

They have revealed that under 2 children show poorer language skills and language delays correlating with earlier solo viewing of “educational” videos.

In both cases, the problem seems to be the electronic baby sitter replacing interaction with mum or dad.

For 2 to 5 year old’s the APP recommends no more than 1 hour a day screen time and still with mum or dad taking part in screen time.

“At this age, children are capable to transfer their new found learning from the screen to the real world” states Ms Bude.

“Even if they don’t appear to be watching what is on screen, you will see them role play it out in social, emotional or behavior context” she continued.

AAP has a strong brand preference for educational viewing out of the thousands of “education branded apps” out there, listing Sesame Workshop as a trusted evidenced based educational media brand.

Children that have more than 2 hours screen exposure a day are more likely to:

> snack on foods high in sugar, salt and fat

Excessive TV has been linked to other negative outcomes such as poor cognitive performance, antisocial behavior and sleep stealers, such as bedtime resistance, nightmares and night terrors.

Scarily though research now indicates that for every hour of television children watch each day, their risk of developing attention-related problems later increases by ten percent.

I recommend the  following tips for parents:

-Develop a Family Media Use Plan and stick to it. Click here for more info: https://www.healthychildren.org/English/media/Pages/default.aspx#wizard

-Watch what your child is watching- monitor your child’s response by how they behave once the screen is switched off.

-No TV in bedrooms.

-Don’t use the IPad for bedtime story time.

-No TV in eating areas- children are learning to eat watching screens. 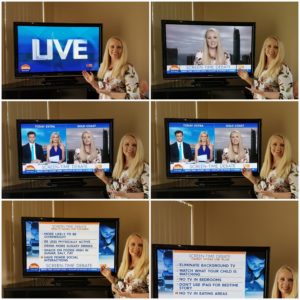 How Daylight Savings Impacts on Your Child’s Sleep Routine.