Ever since it was announced that Prince Harry and Meghan Markle were expecting their first child, there have been reports almost daily about everything from when the due date is to what names they have picked out. Of course, there has also been tons of speculation about the baby’s gender and now some royal watchers and fans are convinced that the retired actress is having a boy.

So why do people think the duchess is having a boy now? Well, the pair hasn’t cut down on their public engagements and many believe that Markle’s appearance may signal what she’s expecting. According to Amanda Bude, a midwife from Groovy Babies, the way the former Suits star is carrying her baby could be an indicator. 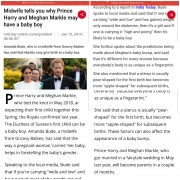 [ARTICLE]"Midwife tells you why Prince Harry and Meghan Markle may be having a baby boy" Mid-Day.com, January 12th 2019. 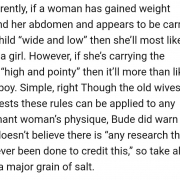 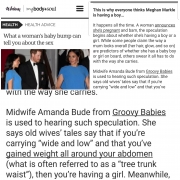 [ARTICLE] "What a woman's bump can tell you about the sex: is Megan Markle having a boy?" Body and Soul 10th January 2019 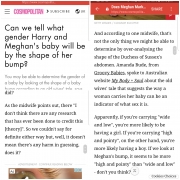 Want to join the discussion?
Feel free to contribute!

To Separate Your Twins For Sleep or Not?

[ARTICLE] How To Get A Good Nights Sleep
Scroll to top